When is the best time for Manaslu Circuit Trek?

Trekking in Manaslu Region is reasonably the ideal way to acknowledge the magnificence of the Himalayas. Manaslu region is yet an unspoiled and unexplored part of Nepal. However, the number of trekkers has been increasing in recent years.

Due to its remarkable Himalayas view and the culture of the locals, this Manaslu Trekking is one of the best trekking destinations in Nepal and a great alternative to Annapurna Circuit trekking.

You can do the Manaslu Circuit trek at any time of the year. Every season offers a different perspective of the Manaslu Region. However, Spring and Autumn are the best time for Manaslu Circuit Trek since these seasons offer moderate weather and a stable climate.

In addition to that, You can also do Manaslu trekking during winter and monsoon, but the trek will be far more challenging. However, you can avoid the Manaslu Trek Difficulty with proper preparation during these seasons.

As the best experience comes from the best time, we should need to permit them to make the best trekking at the best time for the best understanding.

So, for those who want to know the best time to trek Manaslu Circuit or if you can trek during the unusual months of January or July, read the following. It is a piece of detailed information on the condition of the Manaslu Circuit trek in different seasons. 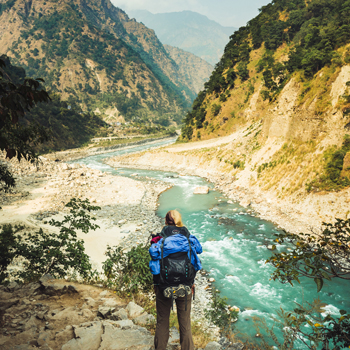 Manaslu Trekking is one of the most stunning treks of... Read More

March is one of the best times to trek the Manaslu Circuit as it is the beginning of the spring season. You can enjoy the colorful blooms of rhododendron in the lower Manaslu regions. During this time, the weather and temperature condition are perfect for trekking. The temperature is usually calm at 2 to 8 degrees Celsius. It is neither too cold nor too hot. Days are stunning and warm, with clear blue skies and picturesque mountain views. Hence, this is one of the best seasons for the Manaslu Circuit trek.

During April, blooms of the rhododendron are at their colorful best.
Due to its stable weather conditions, You can see actual and inspiring mountain climbers in action during this month.

April is one of the peak times to trek in the Manaslu Region. Hence, the trail and teahouses are mostly crowded with climbers, trekkers, and travelers in the region.

Manaslu Trek in May

May is the end of the spring season. In May, you can experience the last blooms of the flowers on the hill.

During May, the days are bright and long. It may be pretty tough to trek during the afternoon as it can get boiling. However, if you don’t mind the warm weather, you can enjoy the trail with beautiful mountain views.

The trails are also less crowded during May than in March and April.

June is the start of the summer monsoon season in Nepal. Due to the rainfall, the temperature rises, making a tremendous straightforward walk in the morning.

However, most people avoid trekking in the summer (monsoon) season due to the wet and slippery conditions of the trails. You can also find leeches and mosquitoes on the trails and in your tea houses.

Although June is not the best time for Manaslu Circuit Trek, it can be a great month. It is the beginning of the monsoon season; it doesn’t see as much rain. The rainfall is short and far between. You can also catch beautiful rainbows in the hills.

You will sometime get clear blue skies and long, bright days. The trails are not that packed, and the teahouse is less crowded during this season. This gives an intimate experience with the locals,s which is impossible during the peak seasons.

The monsoon sits comfortably during July, and nature comes back to life. You can enjoy the lush and dense green forests and landscapes and experience the forming of streams, creeks, and waterfalls during this month.

However, you can face difficulties in trekking in July, such as landslides, unexpected road blockages, and flight delays. Some lodges and tea houses remain closed due to bad weather and a few trekkers.

During August, the monsoon is in full swing. You have limited choices for accommodation in the higher regions of the trek. Most of the tea houses are not open. In the lower regions of the trek, due to the constant rainfall, vegetables thrive. You are in for a treat with various freshly cut, seasonal vegetables during meal times. You can enjoy the entire flow of waterfalls, streams, rivers, and lakes. If rain doesn’t bother you, then August can be rewarding for you in many ways.

September commences the autumn season in Nepal. It is the shoulder month between the off-season of monsoon and the best season of Autumn.

You can have a different trekking experience depending upon which time of the September you are trekking.

Since September is the end of the monsoon and the start of Autumn, you may experience occasional rainfalls. The monsoon officially ends in mid-September so that you can enjoy cool temperatures along with bright and clear days.

The Manaslu trail begins to dry up with more stable weather conditions. Trekkers can embrace the treks with clear views of the varied landscape and temperate climate.

October is the best time for Manaslu Trekking which is also the starting of the Autumn season. It is the best season to trek in entire Nepal. The weather condition is just perfect in the Upper regions of the trek. The temperatures range from 12 to 18 degrees Celsius.

The climate becomes more stable; it is neither too warm nor cold. The day is bright and precise, offering crystal clear views of the mountains and their landscape. That is why trekkers worldwide flood into the Manaslu Trekking during this year.

November is another excellent month to do treks in Nepal. November marks the end of the autumn season. Hence, the temperature during this time drops significantly. The temperatures start to cool and are the driest month of the year. It will be much easier to trek on the dry trail.

At higher altitudes, the temperature drops down to the freezing point during morning and night. I recommend you pack some warm gear if you are trekking the Manaslu Circuit during November.

If you are an athlete and into marathons, cheer up! The annual Manaslu Trail Race/Marathon takes place in November.

December lies in the winter months in Nepal. It starts getting cold during December. The average temperatures are 8 degrees Celsius in the lower region and can get up to -8 degrees Celsius at higher altitudes.

In December, the days are cool and bright. The weather offers clear weather with beautiful sunrises and sunsets in the mountains.
You can enjoy some of the breathtaking views of the pristine mountain.

The climate gets too cold during mid-December. So, the locals of Samdo village usually move downwards to Pokhara to avoid the cold. Hence, most of the teahouses and lodges are closed during this time.

However, if you want to experience the extreme adventure in the Manaslu trek with the majestic Himalayan views, prepare yourself with proper training and camping equipment. You will also see some villagers staying behind to look after the household and animals.

January is the coldest month of the year in Nepal. The temperature is freezing, but the skies are mostly clear. The trails are mostly covered with snow, and you may need crampons to cross the pass during January.

During this time, the trekkers may need to face many challenges such as winter storms, heavy snowfall, freezing temperatures, etc. The temperature can go down to -16 Degrees Celsius in the higher regions.

Although cold and chilly, you can still enjoy the trek with an enticing mountain view under clear skies. You can also witness frozen waterfalls, streams, lakes, and rivers. With very few trekkers this month, you can enjoy the peace and tranquility of the trails and the region.

Many teahouses are closed, so bringing a tent and sleeping bags is mandatory.

There is not much difference between the temperature in January and February.

February is the end of the winter months. During Mid-February, the temperature gradually rises along with melting snow. Likewise, rhododendron and other blossoms in the forests begin to grow, and most teahouse reopens for the visitors.

The higher regions may experience unpredictable weather. So, pack cold winter clothes and winter equipment like crampons for a safe and comfortable trekking experience.

The Manaslu Trek is a beautiful off-the-beaten-trail trek in Nepal that rewards the trekkers with its majestic views of mountains and landscapes and its rich cultural diversity regardless of the month you trek in. You can do this trek any time of the year with the right gear, equipment, and preparation.

Furthermore, if you have any queries or questions regarding the Manaslu trek, please get in touch with us or read our blog on “A Complete Guide to Manaslu Circuit Trek.”