When you are planning a trek anywhere in the world, having basic knowledge regarding the weather and temperature of the trekking region is essential.

This Annapurna trek is renowned for its climatic changes. The Annapurna Circuit trail takes you from subtropical meadows to semi-arid lands.

Annapurna Circuit Trek is considered one of the best long-distance treks globally, and you will get picture-perfect views and remarkable scenery at any time of the year.

October and November is the best time to trek the Annapurna Circuit. During these months, the Annapurna trail is filled with the energy and aura of trekkers worldwide.

October and November come under the autumn season in Nepal. Since autumn comes after the monsoon, the dust settles down, and the mists clear up. During autumn, you will experience clear blue skies with lesser clouds. You will have exotic views of the majestic mountains and surrounding landscapes. Also, the vegetation is fresh and blooming.

The night view during this time is no less. You can enjoy the fantastic starlit night sky. And I am sure that the fantastic clarity will surprise you.

On the lower areas of the trek, the weather is quite sunny, with an average temperature of 15 degrees Celsius during the day. But, the nights get chilly with 7-8 degrees Celsius on average. Unlike the lower region, the higher altitude areas are much colder. When you get above 4000m altitude, the weather gets noticeably colder. Thus, it would help if you were prepared to face the freezing weather in these areas. So, pack more warm layers of clothing to your Annapurna Circuit Trek packing essentials.

There is a meager chance of rainfalls and snow during the autumn months. Hence, October to November is considered the best month for Annapurna Circuit Trek with the best weather and temperature. 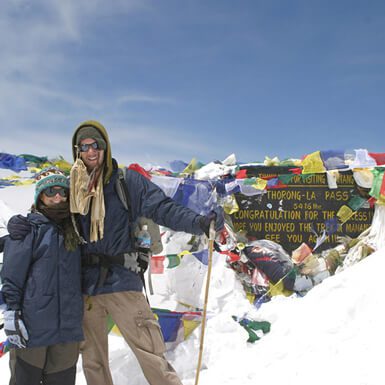 The Annapurna Circuit Trek is widely regarded as one of... Read More

Annapurna Circuit Weather and Temperature – March to May

March, April, and May are the spring months in Nepal. Spring is the second-best season to trek the Annapurna Circuit. Spring falls after winter, so the snow starts to melt and clear the trails during this time. Thus, the trails get flooded with trekkers as the spSpringegins.

March is the beginning of the spring season. Like autumn, Springs is a beautiful time to get crystal clear views of the massive mountain peaks and beautiful landscapes. During this season, the vegetation is at full blossom. Thus, you can witness colorful blossoms of rhododendron and other wildflowers during this time of the year. Hence, it is the best time for trekkers who love to enjoy flora and fauna.

The region’s temperature rises as it approaches the monsoon season by May. The average temperature ranges from 18 to 22 degrees Celsius during the daytime, but the nights are colder than the days.

The higher altitudes have lower temperatures. You can enjoy bright, warm days at altitudes above 4000m.

June-August falls under monsoon month in Nepal. Trekking during the start of June and the end of August, you won’t get a great deal of rain. But in between this time, i.e., during July, the region encounters a torrential amount of downpours. There will be many leeches, mosquitoes, and other pests in the lower part of the trek.

However, this is not the case in the overall trek. Due to the diverse landscapes, most parts of the trail of Annapurna Circuit can trek without a trace of rain. Since the northern part of the Annapurna Circuit falls under the rainshadow area of Annapurna Massif, it won’t see much rain. Yet, this time of the year is the off-season for this trek.

The southern part of the trek gets heavy rainfall causing causes landslides, avalanches, flight retractions, and delays on the path. If you are an adventure lover, it may be favorable for you.

Unlike the southern section, the northern territory of the Annapurna Circuit trek(e.g., the Mustang district) is dry. These regions are arid and also called the desert of Nepal.

You can fully experience these parts of the Annapurna Circuit or treks in Nepal’s other rain shadow areas like the Upper Mustang Trek, Dolpo Trek, and Tsum Valley trek.

The southern segments of the Annapurna locale get a normal of 600-800mm of rain every month during this period. And the areas like Jomsom, Lower Mustang, and Mapha get as meager as 50mm.

You can also experience the water bodies coming alive during these months, which remain dry in other months of the year. Along with that, you can also enjoy the lush green forest and rich flora and fauna of the region.

December to February are the winter months in Nepal, making them the coldest months in the Annapurna region. The temperature during winter varies depending upon the altitude.

Thorung La Pass may remain closed during the winter season due to heavy snowfall. So, I recommend you check the condition of the pass before trekking across the pass. Also, you may trek during early December to avoid the blocked pass.

The weather is usually cloudy during these months. But, you can enjoy the beautiful views of snow-capped mountains if the days clear up.

September and February are two shoulder months. So, if you are trekking during these months, you can experience two seasons within a single month.

September is a transition month for the monsoon to the autumn season. So, you may still enjoy the ending showers of the monsoon season. During early September, the rains are usually short and fall during the late evening time.

When the time approaches mid-September, the monsoon will officially end. Thus, you can take in the perks of the autumn season in late September. And it is the best time to enjoy the highlights of October and November, and there won’t be many trekkers on the trail.

February is the shoulder month for the winter and spring seasons. Early February is the last week of the winter. So, the temperature is negative degrees, and snowfalls can be expected. By mid-February, spSpringicks in.

IF you are trekking in early February, there are chances that the day will be cloudy. But you have the clear days; you get a breathtaking view of the crystal clear snow-capped mountains covered with white shining snow.

You can start to see the wildflowers blossom in the lower regions by late February. You can witness the entire hillsides covered in colorful blossoms of wildflowers that make picturesque landscapes and snowy mountains.

The temperature begins to rise in mid-February as the spSpringfficially starts. Hence, you will be able to experience the perks of spSpringithout the crowds.

As I said earlier, I can do the Annapurna Circuit Trek at any time of the year. All you need is the proper preparation, gear, and supplies to make the trek successful and memorable.

Depending on what you expect from the trek, decide the season you want to do the trek in.

Feel free to contact us for further queries or questions about Annapurna Circuit or other Nepal treks.